When you read the word currency, what comes to mind?

Money is the word that comes to mind for almost everyone. But money alone doesn’t tell the full story, which is why I’ve felt so empowered to write this article for you today.

Because as important as money is—and money is VERY important—there’s so much more you need to consider as an entrepreneur. There are five currencies, in fact, and money is only one of them.

If you’re an entrepreneur who wants to build true, long-lasting success, you NEED to know about, appreciate, and embrace these five currencies!

You can enjoy short-term wins and brief successes by only focussing on one or two. But doing so forces you to constantly reinvent yourself and chase after the real success you crave—it always out of reach.

But with all five, you can build the business you desire and the one your customers need. Let’s dive in 👇

If you don’t know me or my journey, I’ve been an entrepreneur from a very young age (you can dive into my story here). For a long time, I associated business with money. The more I made (and kept) the better. The funny thing is, it wasn’t money that drew me into entrepreneurship in the first place.

It was the desire to feel worthy, appreciated, and “seen”.

Which plays a big role in these five currencies… but we’re getting ahead of ourselves.

First, you need to appreciate why these five currencies are important to you as an entrepreneur. Learning about them isn’t enough unless you use these currencies to leverage them to build something meaningful.

I won’t go into the ins and outs of this popular and game-changing methodology (you can do that here). What I will say is that it doesn’t look at your entire audience as one group. Instead, it better appreciates their current situation.

When you implement this simple yet effective strategy into your marketing, you create a Waterfall Effect where your audience naturally goes from sidewalk → slow lane → fast lane while you simultaneously bring in new traffic each day, week, and month.

It creates true exponential growth, and it revolutionized my businesses in 2015 (as well as many clients).

Here’s an example of this…

Imagine you run a new campaign and bring in 1,000 leads in one week.

You have 100 hot prospects, but what about the rest of them? You nurture them through a Relevancy Funnel, which moves 100 from the slow lane → fast lane, and 300 from the sidewalk → slow lane.

Meanwhile, you run another campaign that brings in fresh leads for you to nurture.

As you can see, this approach creates a waterfall effect that exponentially grows your traffic (and revenue streams). It’s one of the most effective ways to grow your business, which I’ve seen firsthand through my own companies and the thousands of others I’ve worked with and mentored.

Money plays an important role in all this. Yet money alone won’t cut it. Yet it’s money that almost every entrepreneur gets consumed with—myself included before I figured all this out 👇👇

Money is the first currency and for good reason. It is, after all, essential to any business because you can leverage it to build, grow, maintain, and much more.

Yet surprisingly, money is the least important currency on this list because it’s the least fragile.

You can make more money; there’s no ceiling on it—which isn’t true for other currencies like time.

And although money is great and all-powerful, it’s only ever a means to an end. Unless you leverage it and properly use it, it’s just paper or data.

This brings us to time and the precious role it plays in your business and life.

You only have so much of it, and although you can leverage other people’s, they only have a finite amount. Compared to money, it’s much more fragile. You need to effectively use yours (and your team’s) to build and maintain momentum.

Without carefully and consciously thinking about time, you cannot achieve the goals you set.

Due to its fleeting nature, time only goes so far. This is why building an audience is so important because it allows you to better make use of your time.

With an audience, you don’t have to waste time pitching every lead and sale.

But similar to time, it’s fragile by nature because you can spend years creating an audience only to lose it with a single tweet, mistake, or decision.

I see this all the time as influencers build an audience only to forget about how important they are—as a group, but also as individuals.

Having an audience is one thing, but it means little unless you have influence over it.

You can build an audience overnight with one viral message, but acquiring influence takes time and commitment (and lots of consistency).

Finally, there’s the knowledge you acquire over the years and the expertise you develop.

This once more takes time and commitment.

You’ve spent your life nurturing this, yet you cannot stop now you’re an entrepreneur. You need to respect both the knowledge gained so far and the experience you will gain in the future.

Those other four currencies mean nothing if you stand still and allow life to pass you by.

How These 5 Currencies Are Constantly in FLOW

It often begins with money, but it cannot simply all be about money. Yet this is what takes control over most people—entrepreneurs and employees alike. You slip into thinking it’s the only currency that matters.

If anything, it’s the least important.

Although that isn’t to say money doesn’t play an important role!

After all, money gives you freedom and choice. With money, you can better leverage your time, which allows you to build an audience. As this grows, you gain greater influence, which affords you more money… more time… an even larger audience.

And with this, you can use these other four currencies to gain new knowledge and experiences.

… to evolve yourself so you can keep innovating and providing the services your audience needs.

If we return to that waterfall effect, it’s these five currencies that fuel it. Sure, money is what often ignites it (although not always, as sometimes other currencies may come first, such as knowledge or time). Yet money alone won’t maintain the flow. Before long, the waterfall WILL dry up.

These five currencies are in flow, fueling one another.

The question is, which one(s) are you focusing on?

For a long time, I focussed far too much of my attention and energy on money. Like most people, it’s the only currency I knew about; it’s all that mattered.

Once I learned about all five currencies and gave each of them the respect they need, my businesses grew… my life improved… and my personal relationship with ME flourished to unimaginable heights.

And yes, it led to making A LOT more money 😎

That’s the thing… the universe gives more money to those that respect these five currencies. It respects the fact you appreciate the role money plays. It trusts you to be a better steward of it, not consuming it for the sake of it or wasting it on “stuff”… instead, you’ll use the money you earn to ignite so much more.

I hope this article has opened your eyes and left you thinking about all “this” from a new perspective.

If it has, and you want to keep peeling away the layers, be sure to dive into The ROI Method guide — which you can access for free here →

This guide not only shows you how to create that all-important waterfall effect but to fuel it with these five currencies working in alignment. Once you do, you instantly stand out from the crowd. Grab it here now. 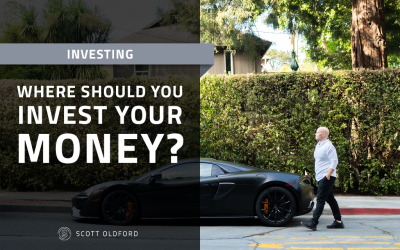 Where should you invest your money?

As someone who mentors entrepreneurs with fast-growing businesses, it’s a topic that comes up often. There’s no shortage of options, either: real estate, stocks, startups, cryptocurrencies, to name a few… You want your money to work for you. Only so much cash in the...

This was a bank statement from 2018, for a single month… I share it with you…because if you look closely you'll notice. Past the "impressive" number is…the reality of so many Entrepreneurs. Make a lot.Keep almost nothing. The number of Entrepreneurs I see on a weekly...